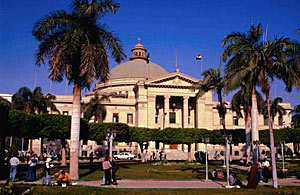 For the first time since U.S. News & World Report for University Rankings has appeared in 1983, it publishes the ranking of the best world universities on its website which is specialized in education and known as Report College and University rankings. Noteworthy, it is one of the most important references which issue the rankings of American Universities and Institutes around the world. The report showed the existence of Cairo University among the top 500 global universities according to this ranking which is considered one of the most famous global rankings and the widest in America. It is based on ranking American Universities since many years ago.