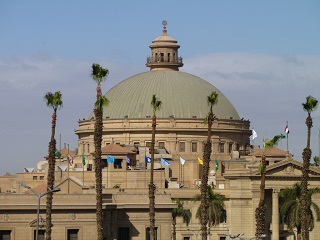 Professor Gaber Nassar, President of Cairo University, has confirmed that there is a contest underway between Faculty of Engineering and Faculty of Urban Planning at Cairo University. The contest is for developing designs of educational buildings complex as an annex to Cairo University at Bein El-Sarayat land. The complex is consisted of two main parts; the first is devoted for establishing a building for Faculty of Computers and Information which has no independent building, crowding out Statistical Studies and Research Institute in its buildings, provided that the rest of the land is devoted to facilities used by all the university faculties, such as; laboratories and auditoriums. Nassar has pointed out that demolition process at Bein El-Sarayat land has been finished to pave the way for establishing university annex, except for the archaeological building which will be customized for establishing a museum for Faculty of Archaeology in cooperation with Ministry of Archaeology and UNESCO Organization. He pointed out that Faculty of Archaeology has extracted all the documents of the building. It turned out that the building was built by the Belgians within their buildings which have been in Egypt for more than 140 years.

Nassar has said that Bein El Sarayat Land Establishment Project will greatly contribute to the university development, its current and futuristic needs as the university suffers from an increase in density of students and buildings in the campus’ annexes. Working in the project will be done after finishing designs and extracting building licenses. It is also scheduled that a building will be allocated for Faculty of Computers and Information in the land and building plan to serve the needs of the faculties and the centers in the educational process. These buildings include auditoriums, lectures halls, and laboratories.

Noteworthy, Cairo University has received Bein El-Sarayat land from Elmasry Foundation for Community Service in April 2009 as a usufruct for the university for 99 years. Working on the land stopped because of a dispute on its ownership. Giza Governorate received the land then donated it to Cairo University in January 2013 as a usufruct for 25 years with affordable rent to build research, scientific and educational facilities provided that full flat basement is established to be used as cars stop in coordination with the governorate. In November 2013, demolition license has been issued to all buildings except the archaeological building. The area of the used land is about 30, 253 square meters equivalent to 7.2 acres.

Bein El Sarayat land was a property of Al-Ahram Company for Beverages and was sold years ago in the framework of privatization. It has been used by the company until its ownership returned to the Holding Company for Tourism, Hotels and Cinema, affiliated to Ministry of Investment, and has been donated to Cairo University. The land is located in a distinctive area somewhere between the chateaux neighboring to the university campus.