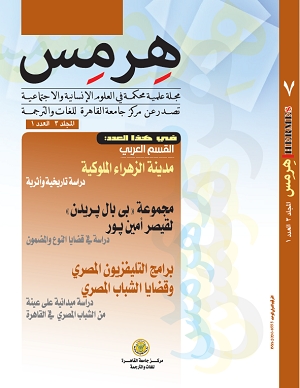 Center for foreign Languages and Professional Translation – Cairo University has issued a new version of “Hermes”, a journal specialized in publication of researches in Human and social sciences in Arabic and foreign languages. “Hermes” is launched in the context of Cairo University translation project conducted through Center for foreign Languages and Professional Translation at the university, sponsored by Professor Gaber Nassar, President of Cairo University, and supervised by Professor Amany Badawy, Manager of the Center. The project aims at boosting scientific publication among staff members and researchers in Egypt and the Arab World in human and social studies and research field.

The researcher has conducted an empirical study on a sample of 427 words from students of Cairo University, Ain Shams University, Al-Azhar University and the French University. Certain study levels have been selected with maintaining the proportion between females and males.

The foreign department in “Hermes” includes several studies, such as; the study of Dr.\ Mustafa An-Nashar about future philosophy which means contemplating and reading the future image at several standards concerning the future of economic and political life as well as the future of scientific and technological developments witnessed by Mankind. He tackled some writings that issue future visualizations until the millennium’s end. There is another study in Spanish by Dr.\ Hanaa Al-Aidy on Andalusian Poetesses who contributed to Andalusian literature enrichment.

Professor Amany Badawy, Manager of Center for foreign Languages and Professional Translation, has said that the center’s Board of Directors has approved in its last meeting, headed by Professor Nassar, the translation administration development plan concerning carrying on the cultural projects and the scientific journals issued by the center, participation of the center in international and local conferences and funding non-profit cultural projects.