In the Presence of Minister of Communication and Minister of Scientific Research, Professor Gaber Nassar Inaugurates the Ninth International Conference on Informatics and Systems (INFOS2014) 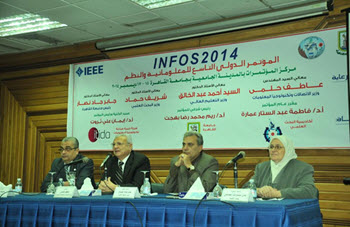 Engineer Atef Helmy, Minister of Communications and Information Technology, has asserted that transparency, efficiency, fair distribution among citizens, and integration can never be achieved except through two weapons; serious education and scientific research. He pointed out the importance of internet network in creating digital society, creating services in technology and communications, as well as the modality of benefiting from Egypt’s geographic location in developing communications and technology.

Professor Sherif Hammad, Minister of Scientific Research, has emphasized the necessity of coherence between Ministry of Scientific Research and Ministry of Communications and Information Technology. He added that large sums of money are being pumped for investment in several fields, and that the ministry aims at enhancing technology. He illustrated that the ministry boosts scientific conferences in the Egyptian Universities.

Nassar has also declared that the university is going to establish new building for Faculty of Computers and Information, and that designs for the building, to be built at Bein El-Sarayat land, has already been prepared.

Saroit added that the conference aims at discussing and displaying the most important and recent researches in Computers and Information Sector, and that for the first time new mechanism is implemented; using a program for detecting scientific plagiarism to insure the authenticity of different researches.

Omara added that the researches submitted to the conference have reached 100 researches from which 60 researches were accepted. Noteworthy, the submitted researches have been revised by specialists of staff members from universities inside and outside Egypt, they have also been scrutinized to guarantee the intellectual property.

In the Presence of Minister of Communication and Minister of Scientific Research, Professor Gaber Nassar Inaugurates the Ninth International Conference on Informatics and Systems (INFOS2014) - Cairo University