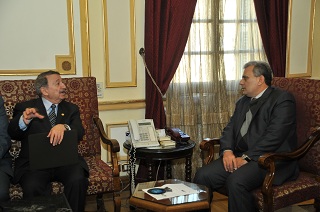 The Egyptian scientist Mostafa A. El-Sayed has confirmed the necessity of coping with the world nowadays in searching for new resources and ideas in Nanotechnology field.

Professor Gamal Essmat, Vice President of Cairo University for Graduate Studies and Research, has declared that the university founds expertise house that includes 5 Egyptian scientists from abroad as well as 5 scientists from inside Egypt aiming at developing the potentials of scientific research in the university in order to be up to world-class through research plans and programs that include new ideas and applications in scientific research, especially Nanotechnology.

Noteworthy, Professor Mostafa A. El-Sayed is an Egyptian chemical physicist. He is the first Egyptian to be awarded the US National Medal of Science, which is regarded as the highest American badge of honor in science, for his achievements in Nanotechnology field and implementing this technology using micro gold compounds in treating cancer.