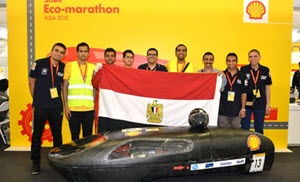 A team from Faculty of Engineering – Cairo University has won the fourth place, as they represented Egypt in "Shell Eco-Marathon" 2015 which was held at the Philippine capital Manila from February 26 to the first of March 2015. It is a global competition organized by Shell Corporation between student teams in major universities at the global level for designing and manufacturing energy-saving (eco-friendly) cars. The team has got Communications Award; an award allocated to the teams that are highly aware of the ideas and objectives of the competition, boiling down to encouraging the rationalization of energy consumption and preserving the environment as well. Prof. Dr.\ Sherif Murad, Dean of Faculty of Engineering – Cairo University, has illustrated that the faculty has participated with two gasoline-saving cars in two car prototypes; Horus car and Anubis car in the Urban concept Gasoline.  Anubis team car has won the fourth place in Urban concept Gasoline from among 15 participant cars in the same category, as the car has covered 57 KM consuming only one liter of gasoline. The results are measured by who is able to drive to the farthest distance ever consuming the equivalent of 1 Kilo Watt of electricity per hour or 1 liter of fuel.