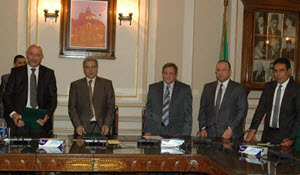 A cooperation protocol has been signed between Cairo University and ICDL ARABIA in the field of providing the international license programs for promoting computer and internet skills among Cairo University students and graduates. Noteworthy, ICDL ARABIA represents the regional arm of European Computer Driving License Foundation – ECDL.

Professor Nassar has declared that this protocol will enhance the informatics awareness of the students, graduates and academic and administrative cadres of the university; especially that it includes a new certificate in ICDL field, in cooperation with prominent educational academies with international reputation.

Nassar has also pointed out that the university seeks mechanizing its administration and sectors and is also keen on obtaining quality accreditation.

Mr.\ Gamil Ezzo, General Manager of ICDL ARABIA Organization, has said that the organization launches NEW ICDL certificate into the new structures and syllabuses for the first time in Egypt through Cairo University.