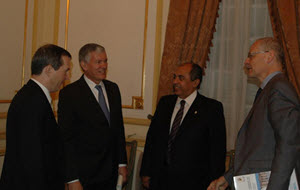 Prof. Dr.\ Abu-Steit has said that cooperation between Egyptian and French Universities enjoys the concern of Ministry of Higher Education and the government. Many French programs are taught at Cairo University at Faculty of Law and Faculty of Economics and Political Science. He added that since its establishment in year 1908, Cairo University has been sought preparing faithful generations for their nation thanks to the efforts of its professors, students and employees.

Abu-Steit has also added that France is Egypt's friend state as it has always stood by its side over the past years to extend its cooperation so as to create a productive future for Egypt's sons. He has also said that academic cooperation between Cairo University and Paris University always goes forward.

The Vice President of Sorbonne University (Paris 1) has said that he is delighted with the successful cooperation between Paris University and Cairo University. He mentioned that International Business Law Institute highly qualifies lawyers to work at international bureaus and helps them reach supreme cadres of public professions.

Dr.\ Samy Abdul-Baqy, The Egyptian Director of International Business Law, has declared that the institute is a vital production of the cultural relations between Egypt and France. He expressed his thanks to Dr.\ Gaber Nassar, President of Cairo University, and Dr.\ Omar Salem, Dean of Faculty of Law, Cairo University, for their great continuous concern and support for the sake of the success of the institute's mission in Egypt. He expressed his hope in the ability of Ministry of Higher Education to encourage universities to conduct cooperation protocols with the global universities to facilitate getting quality and accreditation and providing students with multilingualism opportunities as well.