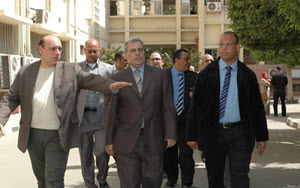 In the same context, President of Cairo University has inspected the second phase work of New Kasr Al-Ainy Emergency Hospital (185). He checked the completion of all the operations requirements of this phase which has already started to receive patients. Nassar said that the unit was scheduled to be inaugurated on Tuesday, March 24, 2015, in the presence of Eng.\ Ibrahim Mahlab, The Prime Minister, but it was postponed because of the Prime Minister’s engagements, provided that this phase is inaugurated throughout the next two weeks in the presence of Mahlab.

Nassar has pointed out that the second phase of New Emergency Hospital is composed of the remaining part of the intensive care, as well as 100 beds at the interior departments, and completing the equipments of the remaining floors of the hospital in the second phase counting three flours of Burn and Emergency Departments, after inaugurating three flours of the hospital in July 2012, as well as completing the hospital’s needs of Nursing Sector.