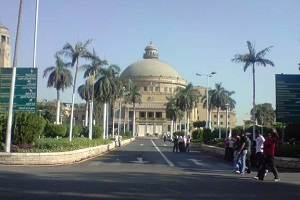 Professor Gaber Nassar has declared that the Arab Universities Association meeting has discussed the schedules prepared by the association’s secretariat. Its most prominent themes are following up the implementation of the previous round decisions, proposing the modification of main and interior systems of the association, the secretariat activity since the previous round have been held in Oman, the Jordan capital, the association’s executive council meetings, mechanisms of boosting Arab work in higher education field. Over two days, Arab Universities’ presidents have reviewed several items in their meetings. These items are the Arab council for graduate studies and scientific research, the Arab council for quality and accreditation assurance of Arab Universities, the activity of Palestinian Universities support fund, the Arab fund for financing scientific research in the secretariat, academic theses repository center, periodicals computing center, cooperation between the association and Arab, regional and international organizations.

Nassar has confirmed the great importance offered by this annual gathering between education leaderships and scientific research in our Arab countries. This great importance is represented in opportunities of opinion exchange and counseling on issues that Arab Universities are concerned in, as the challenges faced by Arab Universities are very similar. He pointed out that Cairo University has confirmed, during the meeting, the importance of enhancing Arab cooperation in the field of adjusting educational process quality in Arab Universities, funding joint applied scientific research that Arab society get benefited from, cooperating in spreading knowledge culture, deepening coordination and cooperation among Arab and academic competencies of various scientific specializations.