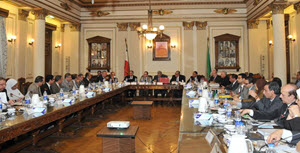 On Monday, March 30, 2015, Cairo University Council has held its meeting, headed by Prof. Dr.\ Gaber Nassar, President of Cairo University, and attended by Prof. Dr.\ Sherif Hammad, Minister of Scientific Research, Dr.\ Khaled Zakariah El-Adly, Giza Governor, Prof. Dr.\ Mahmoud Saqr, President of Scientific Research Academy, and Dr.\ Farouk El-Oqda. The Council has initiated its meeting with congratulating Egypt as a government and people on the success of Arab Summit and return of Arab cooperation. It has also commended the success of the economic conference at Sharm Al-Sheikh.

Cairo University Council has approved activating article 155 of Universities Organization Law concerning the conference policy of faculties. The council has confirmed the importance of linking scientific departments’ conferences to syllabuses and curriculum development, and linking faculties’ plans to society needs. The council has also asserted the importance of rooting the role of scientific departments in the educational and research process. It has also drawn up a strategy for measuring activation recommendations concerning the departments’ scientific conferences, and uploading the conferences recommendations to Cairo University Website, and considering this as a mechanism of University Leaderships Assessment as well.

The council has listened to a group of Faculty of Medicine’s students who published scientific research on blood pressure at the international level getting high rates. Being supervised by Prof. Dr.\ Soliman Gharieb, Professor of Cardiology, the students presented abstract for their research internationally published on blood pressure control rates.