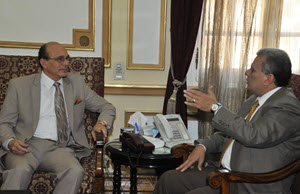 Mohamed Sobhy, the Egyptian artist, has confirmed the importance of the role played by art in society, pointing out that it is important for art to tackle the negatives that the society suffers from so as to solve them. Sobhy has expressed his willingness to contribute to Cairo University’s efforts in promoting the artistic and theatrical activity among the university students, as well as offering theatrical show on the stage of Grand Celebration Hall, Cairo University.