President of Cairo University During His Meeting With Research Team of Kasr Al-Aini Students: “We Are Studying a Mechanism for Adopting The Students Talented in Scientific Research” 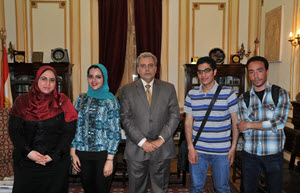 Prof. Dr.\ Gaber Nassar, President of Cairo University, has confirmed that the university encourages scientific research among its students and helps them to participate in scientific conferences in the fields of their specialties to develop their skills. He pointed out that the university boosts and sponsors research projects of students. The university council has approved, in the last meeting in March 2015, that there is a mechanism of adopting talents and student researchers to allow them the chance to continue their knowledge.

This was tackled during the meeting between Nassar and Student Association for Blood Pressure; the first student entity at Faculty of Medicine, Cairo University, to be supervised by Egyptian Hypertension Society (EHS). Its work varies between wide awareness campaigns for audience in many places in Cairo, such as; subway stations for targeting various societal categories. Moreover, it holds training workshops for students and fresh graduates of faculties of medicine, pharmacy and nursing at several Egyptian Universities. Number of the association’s member students has scientific researches internationally published. Their abstracts have been reviewed by Cairo University Council in its meeting in March 2015 after an invitation from Prof. Dr.\ Gaber Nassar, President of Cairo University. In the name of Cairo University, a research, entitled “Blood Pressure in Egypt”, has been published in one of the major international scientific journals. It is considered an organized research review that includes a summary of the results of 21 research studies in Egypt with specific scientific standards. The outcomes have reached a very low societal awareness of the disease and a lack in its control rate.

The outcomes have reached recommendations that confirmed the importance of increasing scientific research in this field to identify hypertension causes and problems for the Egyptians. Some students of Faculty of Medicine’s association member students have participated in conducting the research. They are Doaa Mohamed Hasan, Aya Amish, Yara Bahaa, Gala-el-Din Abdul-Azim, and Aya Alaa-el-Din. They were supervised by Prof. Dr.\ Suleiman Gharib, Professor of Faculty of Medicine, Cairo University. Two other researches have been admitted into the revision stage of international journals arranging for publishing both of them. One of the two researches is entitled “Can Smoking Lead to Hypertension Disease Infection?”. For answering this question, 560 patients from Giza Governorate have been followed-up from January 21to November 21, 2014 to identify the extent of relation between smoking and hypertension disease. Furthermore, a German publishing house has published a booklet for the association, entitled “Hypertension in Egypt .. A Time Bomb”.

President of Cairo University During His Meeting With Research Team of Kasr Al-Aini Students: “We Are Studying a Mechanism for Adopting The Students Talented in Scientific Research” - Cairo University