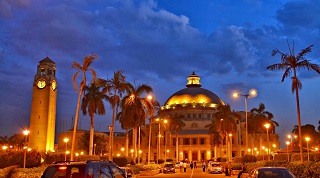 Cairo University Council has reviewed all the criteria of offering Al Qasimi honorary doctorate, his resume, and prominent contributions to cultural fields at the Arab level and the services he offered to Cairo University. Al Qasimi has donated to complete establishing New Central Library at Cairo University, establishing information center and laboratories building at Faculty of Agriculture, and restoring Faculty of Engineering building which was burned during break up Al Nahda sit-in. Cairo University has honored Al Qasimi in 2008 at its first centennial celebration. He has received many global awards and medals, and was offered honorary doctorates from many universities in Europe. He has also authored a large group of literary books and works. Al Qasimi holds an office of President of American University in Sharjah, and Honorary President of Arab Science and Technology Foundation (ASTF).