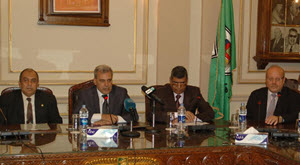 Nassar has said, in a speech during the ceremony, that Cairo University is honored with the late consultant Mohamed Shawky Al-Fangary and the charitable waqf he dedicated to Cairo University for the researches that serves society. He pointed out that human being does not die with the end of his life, but he/she lives in the hearts of others through his/her good deeds. Nassar added that the issues cured through this charitable waqf are in the form of scientific, theoretical and applied research serving society. Thus, the researches presented in the competition are science that benefits society. He pointed out that Cairo University will print the winning researches which include ideas and perceptions that boost the plans of illiteracy combating in Egypt.