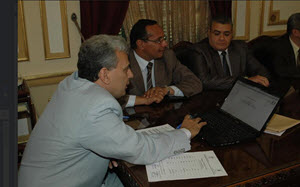 On Thursday, May 21, 2015, Prof. Dr.\ Gaber Nassar, President of Cairo University, announced the result of a subject, entitled "An Introduction to Management in English", for First Year Students, The English Section, Faculty of Commerce, Cairo University. This after the students performed the exam of this subject on the day preceded the results announcement of New Examination System "bubble Answer sheet" which the faculty started to implement. It is an examination model that allows students to select the right answers, facilitating the method of correction via computer, and announcing their results after a few hours. This system is the closest to the American system of student examination.

While he was signing the subject's result and trying random student seat numbers at the faculty website, in the presence of Dean of Faculty of Commerce and Faculty Vice Dean for Education and Student Affairs, Nassar said that the new examination system is fairer and more logical than the former system. He confirmed that the distribution of success ratios of the class illustrates the logicality and fairness of this system, pointing out that 11% of students excelled in this subject, 33% were very good, 40 % were good, and 14% were fair. The total ratio of success in this subject has reached 99%, and the number of failed students is 15 out of 198 students who performed the exam.