President of Cairo University Participates in The Inauguration of The Cultural Season of Rashid Center for the Disabled, Dubai 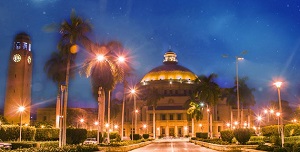 Prof. Dr.\ Gaber Nassar, President of Cairo University, participated in a celebration of launching a book, entitled "Glimpses of Mohammed bin Rashid Al Maktoum's Tweets", in Arabic and English. The celebration was held on Wednesday, May 27, 2015, in the context of the cultural season activities of Rashid Center for the Disabled, Dubai, in 2015.

Nassar's participation came as a response to an invitation from Rashid Center for the Disabled, among 50 cultural and academic figures, to attend the book launching ceremony which includes readings of the thought of Sheikh Mohammed bin Rashid Al Maktoum, Vice President of UAE and Ruler of Dubai. The readings were done through a group of tweets issued in the human and charitable matter which first reading was presented by Abdul-Ghaffar Hussein, An author. It was read by Prof. Dr.\ Gaber Nassar, President of Cairo University, Gris Samawy, Former Jordan Minister of Culture and Manager of Jarash Festival for Culture and Arts, and Manuel Romero from Spain.