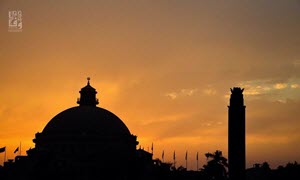 Being keen on the mission and role of journalism and respecting the constitutional articles and the two laws of both Syndicate of Journalists and Journalism organization, we decided to address you after we noticed the existence of some entities that hold out the quality of Professional Syndicate of Journalists, speak in the name of journalists, and launch illegal papers and carnets for their members under the name of "editor, journalist, or e-journalist". Such conducts lead to manipulating professionalism and allow the usurpation of those who are responsible for the profession as well as citizens and use the false IDs in illegal conducts. Thus we request issuing your instructions for those who are responsible at your institutions and all bodies in the name of journalists concerning not granting those entities or those who are affiliated to them any advantages or facilities in the name of journalists or direct deal with the syndicate in this matter and not accrediting any addresses except with the syndicate seal.

The following are scanned photos of the letters