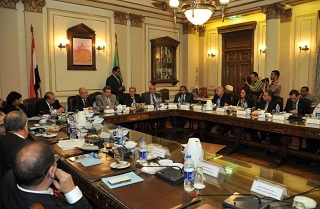 On Tuesday, October 27, 2015, Cairo University Council held its meeting headed by Prof. Dr. Gaber Nassar, Cairo University President. It was attended by Dr. Ashraf El-Shihy, Minister of Higher Education, Helmy El-Namnam, a journalist and Minister of Culture, and Dr. Hasan Rateb, Head of Board of Trustees, Sinai University. The course of the educational process and student activities in faculties, and the position of some of the faculties, that applied for obtaining quality and accreditation, from preparing the resume before the end of the coming December, were discussed by the council. This is to start the procedures of obtaining quality from National Authority for Quality Assurance and Accreditation of Education, whether at the level of those faculties or at the level of study programs

The council confirmed that establishing any student or academic activities require taking a permit from the university, and not taking this permit is considered a violation of law and rules. Cairo University President informed the council with the start of activating the system of fees payment electronically through banks and electronic means of refund; such as, credit card pay in advance or cash from the bank. In the coming stage, other means that are available through the companies working in this field are going to be used. This system has started to be implemented at Faculty of Economics and Political Sciences which is going to be followed by other faculties, the matter which leads to tighten controls on improving the fees and not wasting the time of students.

Cairo University President referred to finishing the magnetic cards of students of faculties of Arts, Science, Economics and Political Science and Archaeology. Preparing those cards is being completed to be distributed among the rest of faculties, referring to the importance of magnetic cards of students in adjusting security system. Cairo University President also informed the council with what has been agreed upon with Ministry of Culture, Cairo Opera House and the Artistic House for Theatre to establish many cultural, artistic and theatrical activities for the students inside the university in the framework of the cultural season of the university for the current academic year.

Dr. Ashraf El-Shihy, Minister of Higher Education, said in his speech in front of Cairo University Council that he was honored with a great mission which is taking the office of Higher Education Minister. However, he is not worried because of his good relationships with the universities presidents, as they can work in the framework of one vision to develop the academic education system. He added that everybody has great aspirations to develop education and scientific research and fund projects, saying that he expects that Cairo University and the rest of other universities are going to be together for the sake of this vision.