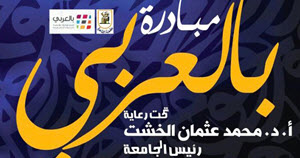 Mogherini: It is an honour to be at Cairo University, a world-class cultural institution

European Union Vice President in a lecture at Cairo University: "From Libya, to Yemen, to Syria – these are dangerous times in the Middle East, North Africa and the Mediterranean, for our region. These times call for the all of us – in the region and in the international community – to come together, to work together"

At the beginning of her speech, Federica Mogherini said "It is an honor for me to be here in Cairo, one of the great capitals not only of the past, of a glorious history, but of today, of our times, and of the future. One of the great capitals of the Mediterranean and of the Arab world. But let me also say it is an honour to be at Cairo University, a world-class cultural institution, and the Alma Mater of three Nobel prizes [FYI: Naguib Mafouz, Yasser Arafat, Mohamed El Baradei]. Mogherini added "I am glad I have the chance to meet so many young people today, and to represent the European Union here with you. Some tell us that there is a war between Islam and the rest of the world. They tell us that Europe, “Rome”, or the so-called West, are enemies to Islam and to Arabs. They lie to all of us – Arabs and Europeans alike. Let me be frank: there has been a time when in the so-called West many have fostered the narrative of a clash of civilizations. It was such a mistake, for so many reasons. Today, the idea of a clash of civilizations has been taken over by Da’esh – terrorists that encourage sectarianism to expand their own power, that exploit divisions for their own interest.

EU vice-President confirmed "Look at the world around us today. Europe and the Arab world have the exact same interests. We want a peaceful Middle East. We want to end terror, and to live free from fear. We want justice and dignity in our societies. We have the same nightmares, and the same dreams. We have all the right reasons to stand side by side, and face the current crises together." She said "From Libya, to Yemen, to Syria – these are dangerous times in the Middle East, North Africa and the Mediterranean, for our region. These times call for the all of us – in the region and in the international community – to come together, to work together. It’s when we manage to do so, that we manage to achieve results that everybody would have considered impossible before. The agreement we reached with Iran last summer is one of these. A deal that makes the whole region safer, and that is already paving the way for better relationship between Iran and all its neighbors – think of the unprecedented meeting we have had in Vienna last Friday, bringing to the table for the first time all relevant regional and international players, including Iran, to start a political process to finally solve the crisis in Syria, after more than four years of war. So, in the short/medium term, this might help us address the current crises. And in the long run, it gives us hope that a more peaceful Middle East is indeed possible. A Middle East free of weapons of mass destruction – this is the dream of my generation, it can be reality for yours."

Concerning peace in the Middle East, she said " We must do all we can to end the violence between the Israelis and the Palestinians. Ultimately, only with two States will there be peace. The European Union strongly believes in this perspective. Ultimately, it is up to the Israeli and the Palestinian leaders to turn the page and choose peace. But we can all do our part to help them take the right decision. For this reason, the European Union has pushed to invite key Arab countries to join our Quartet meetings, as has been happening these last months.

Regarding youth, EU vice-President said "If we do not provide a future for our young people, they might seek out those who promise alternative futures. Here as well as in Europe. So jobs and livelihoods are also a part of how we can defeat terrorism. The European Union over the past three years has provided one million euros to young entrepreneurs and start-ups in Egypt, but also in Lebanon and the Palestinian territories.

As a reply to a question asked by a student at Faculty of Economics and Political Sciences, Cairo University, about the level of cooperation between the European Union and the Egyptian Universities, Mogherini said that she works with the whole United Nations Authority Team to find a way of cooperation between the Egyptian and European Universities which will be achieved soon. She confirmed that they greatly look forward to establishing firm relationships with the Arab youth to face the challenges that all suffer from. She pointed out that future should gather between the Europeans and the Arab people for both share several visions and goals.

Federica Mogherini replied to a question by a student at Faculty of Engineering, Cairo University, who enquired about how a strong Palestinian State can be established with the Israeli State abreast, whereas Israel practices daily violations and has weapons of mass destruction. Mogherini said "If this question was not asked, I would felt that there is something wrong because it expresses the Arab point of view, and the point is how we can get out of this predicament which has been lasting for long decades of time." She said that the European Union believes that the only solution is establishing a Palestinian State with the Israeli one side by side.