A Thanking Letter is addressed by European Union to Cairo University 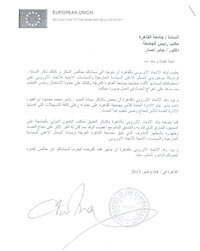 A thanking letter has been addressed by European Union to Cairo University for hosting Ms. Federica Mogherini, the High Representative of the European Union for Foreign Affairs and Security Policy. The text of the letter was as the following:

The EU Delegation in Cairo is pleased to extend sincere thanks to your ascendency, and to Ms. Federica Mogherini, the High Representative of the European Union for Foreign Affairs and Security Policy, whom your Excellency hosted to deliver a speech at the prestigious Cairo University. The EU also expresses their thanks for the warm reception and good organization which helped to bring out the event in the nicest image

Deep thanks are addressed by the EU delegation to The International Cooperation Office – Cairo University for the extraordinary effort exerted and the continuous coordination with the members of the delegation which has had the greatest influence of the success of the event and its honorable appearance which suits the prestigious university and the Excellency of the High Representative of the European Union for Foreign Affairs and Security Policy. The EU would like to take this opportunity to express their sincere appreciation for your productive cooperation with us.