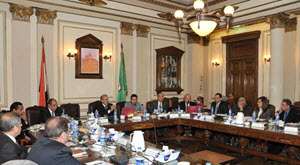 On Wednesday, November 24, 2015, Cairo University Council, headed by Prof. Dr. Gaber Nassar, Cairo University President, congratulate students, staff members and employees at their meeting on inaugurating the new great mosque at the university campus. The council commended the new design of the ladies mosque which the university administration began to build to accommodate 600 ladies at one time. The council expressed their thanks and appreciation to donators, including the university professors and philanthropists from outside the university, for affording the building process.

Cairo University Council condemned the malicious allegations circularized by some individuals on the social media on either demolishing the mosque or preventing the circulation of Mushaf (Quran copy), which are pure fabrication and lies. This is because the university provided 2000 interpreted Mushafs, as well as libraries, presented by the Ministry of Islamic Endowments, including Islamic and heritage books.

Cairo University Council unanimously agreed upon regarding the current term 2015/2016 as the last one for the partial mandate of some professors to occupy leadership positions (dean – vice dean – department chair) at governmental and private faculties and institutes. The mandate have to be full, and the authority to which they are mandated should afford all the dues in accordance with law.