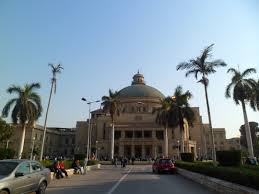 Prof. Dr. Mohamed Osman El-Khosht, Cairo University Vice-President for Education and Students, said that a plan has been prepared for student activities, during mid-year academic vacation, including participation in road race and athletics at Aswan Governorate on February 9, 2016, besides, opening training centers, at the university playgrounds, to sport shows. Students are participating in small projects course, with Egyptian Federation for Scouts & Girl Guide, to be held at Fustat during the period from February 7 to 10. Students are participating with a theatrical show in Ebdaa 3 competition at Youth City, Abu Qir, Alexandria, during the period from February 1 to 13, as well as Third Summit Forum for Quran and Hadith to be held at Menoufia University. Public Administration for Youth, Cairo University, holds trips to Sharm el-Sheikh and Luxor and Aswan, as well as participating in a number of competitions organized by The Ministry of Higher Education.

Prof. Dr. El-Khosht added that mid-year vacation is going to be utilized in conducting training course for employees at student housing, at the university hostels, to develop their performance. Specialized professors are going to lecture in this course to provide them with skills of how to deal with students. Fifty employees have joined this course. Moreover, the first day of public service at university hostels is going to be launched on Thursday, February 4, 2016, in participation with directors, employees and students who are interested in beautifying, painting sidewalks, and removing wastes of university hostels.

On the other hand, El-Khosht announces that for the first time some exam results in five faculties of Cairo University have been announced, and the rest of faculty exam results are being announced, consecutively, during February and the second half of March at maximum.