Congolese Prime Minister Delivers a Speech on Leadership, Governance and Development in Africa at Cairo University 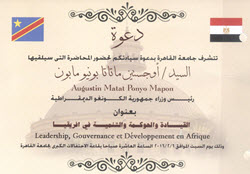 Noteworthy, Grand Celebration Hall, which is also so-called Cairo University Dome, is one of the architectural, unique and famous buildings, and was founded in year 1935. It witnessed many political incidents in the modern history of Egypt and the attendance of many world leaders who delivered their messages to the global society from Cairo University tribune. This included the former French President, Jacques Chirac, who delivered a lecture on the fringe of New Kasr El-Ainy Hospital inauguration, as well as Barack Obama who delivered a speech to the Islamic world in June, 2009.