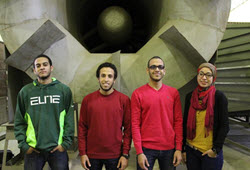 Prof. Dr. Gaber Nassar, Cairo University President, announced that a team from Aeronautical and Aerospace Engineering, Faculty of Engineering, Cairo University, participated in an international competition organized by an American company for space research. The team is looking forward to designing a futuristic mean of transportation that enables human to transfer from a place to another at speeds that are up to 900 KM per hour approximately, which exceeds the speed of the bullet train of Japan. Nassar commended the innovations of Faculty of Engineering students and their many participations in international competitions of university youth at the global level in search and scientific fields and inventions, as well as their achievement of advanced place in the name of Cairo University in international forums.

Prof. Dr. Sherif Murad, Dean of Faculty of Engineering – Cairo University, made it clear that faculty student team succeeded in passing the first stages of the competition at Egypt by presenting a preliminary design for ،،Hyperloop,,. This has come to fruition with the team receiving an invitation to attend the competition held at Texas University, at Texas, the United States of America, on January 29, 30, 2016. The design was presented before the engineers and developers of the American corporation that produces electric cars, and elite of professors from several universities around the world and other transactions.

Murad added that 120 teams from different universities around the world, like the United States of America, Canada, Holland, Germany, Turkey, India, England, Japan, Pakistan, Poland, China, Singapore, Romania, Australia, Spain, Mexico, Uzbekistan, Scotland, South of Africa and Italy, participated in the competition. He clarified that Faculty of Engineering team at Cairo University is the only participating team from Egypt and the Middle East.