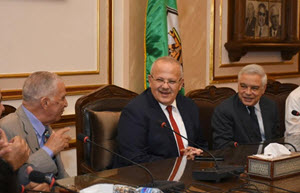 Prof. Dr.Gaber Nassar, Cairo University President, said that the university endeavors to keep its presence in World University Rankings by devoting more efforts to scientific research, developing educational process, compensating for the marks it loses, because of the large numbers of students, by developing some criteria, including increasing international scientific publications among faculty staff. Nassar added that the university kept its presence in Chinese ranking as one of the best 500 universities at world level, and it progressed in Spanish ranking throughout the last two years as well.  He referred to the global excellence of the university in a number of academic specialties as shown by the British Ranking in the report of this year and the year before.