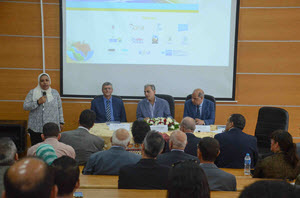 Cairo University President pointed out the importance of Nanotechnology Center, affiliated to Cairo University, in conducting researches with international experts and researchers at Egyptian Universities. Those researches contribute to launching research projects that serve Egyptian industry, including manufacturing solar energy by international criteria, and this was also tackled by the convened workshop.

Cairo University President Gaber Nassar added that the problems which face energy in Egypt need new alternatives, most importantly, solar energy which is clean and renewable energy. Nassar pointed out the efforts of state for providing regular power and energy across Egypt.

Nanotechnology Center Director announced a new diploma in Nanotechnology applications in solar energy production by a program financed by EU which Cairo University, Fayoum University and South of Valley University participate in.