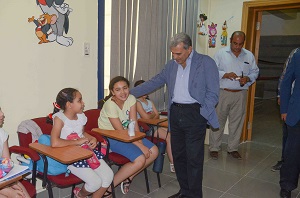 Cairo University President Gaber Nassar made a tour to inspect the establishments of Cairo University Branch at Al-Sheikh Zayed. Prof. Dr. Gaber Nassar was accompanied by Cairo University Vice-President for Graduate Studies and Research Affairs Amr Adly. The tour included the inspection of the two buildings of Faculty of Pharmacy and Faculty of Oral and Dental Medicine which are about to be finished. Prof. Dr. Gaber Nassar visited the new branch of Center for Foreign Languages and Professional Translation at Al-Sheikh Zayed. Nassar met the learners and the children participating in the summer courses of the center. They are being provided with language skills and methods of dealing with others ،،art of etiquette,, . Nassar talked with children on the level of benefiting from what they learn at the center.

Cairo University earlier allocated a new branch for Center for Foreign Languages and Professional Translation at Al-Sheikh Zayed. The new branch is established due to the expansions made by the center in training courses and the art of translation which Egyptian and Arab learners are interested in.