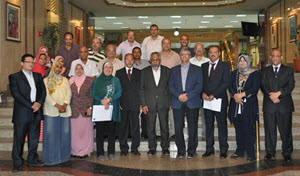 International Quality Audit Committee recommended certifying New Central Library – Cairo University to ISO 90012008 for the second year on June 5, 2016, as it obtained the same certificate for the first time in the Middle East in 2015.

Certifying the library to ISO is sponsored by Cairo University President Gaber Nassar. The certification was witnessed by the University Vice-President for Graduate Studies and Research Affairs Amr Adly, The Library Director Amany Refaat, all the supervisors of the library and some major international quality assurance auditors.

Prof. Dr. Amany Refaat said that obtaining ISO certificate for the second year is a statement by International Quality Audit Committee on the distinction and promotion of the library in providing academic society with services.