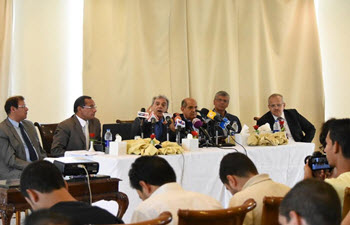 Prof. Dr. Gaber Nassar said, during the press conference attended by the representatives of mass media, that ،،the university appreciates the importance of its dome and all the buildings that form the entity of the university,, . He pointed out that ،،the university and its buildings are possessions of the Egyptian people,, . He added that ،،the university regards the concerns of the public opinion respecting the information circulated on what is done to the university,, . He said ،،we are not to allow disfiguring the dome of Cairo University, but we maintain its soundness,, . He added ،،the replacement and renewal are being conducted to the air conditioning runs which are existent since the sixties and were renewed in the eighties but never witnessed a change before,,

Prof. Dr. Gaber Nassar said ،،the meeting resulted in some important recommendations most important of which are that the air conditioning of Cairo University dome is necessary and the system used in the air conditioning is optimum at the current time. There is a potential of air runs and air passing units adaptation and processing them architecturally to cope with the original dome design. ,, The meeting approved coordination with National Organization of Urban Harmony and Architectural Engineering Section in the maintenance of heritage buildings at Cairo University. The project consultant will work on the required modifications immediately according to what is agreed upon.

The committee formed among Cairo University, National Organization of Urban Harmony and Architectural Engineering Section at the Engineering Syndicate said earlier in its meeting that it is ready to carry out any changes in air conditioning runs according to international agreements in dealing with historical buildings.