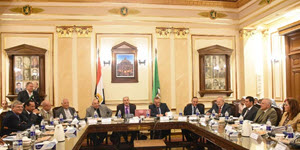 Cairo University Council discussed on Tuesday, September 27, 2016, study conditions and the educational process regularity at faculties during the first study week. The plans of Cairo University faculties in education development and assessment methods throughout the current academic year were discussed. The council pointed out the role of Deans in guaranteeing study regularity, enhancing the educational services offered to students and commitment to the non-increase of study fees in the first university stage.

Cairo University Council urged academic staff members to adhere to the lectures they are assigned to deliver according to announced schedules as well as contacting with students. The council approved the activation of student activities at faculties and the provision of social solidarity to those students who are not able by social solidarity fund. Moreover, the council urged caring for students with special needs.

Cairo University Council demanded fixing study schedules, finishing student distribution on sections and departments during the first study week and finishing the housing of students at hostels according to a specific housing timetable.

Cairo University Council reviewed the preparations it took at the university and faculties levels to receive new students at the new academic year 2016-17. Furthermore, the council reviewed Hepatitis C analyses conducted for students and taking measures of providing infected students with free therapy in cooperation with the Ministry of Health.

Cairo University Council reviewed the adjudication issued by The State Council regarding 25 students of Faculty of Law whom answer sheets of the Commercial Law subject were lost in the second term. The adjudication included their eligibility of getting average mark. The University Council expressed its respect to the judicial decisions issued in this regard and consequently the suspense of re-examining those students.

Cairo University President said during the press conference that ،،the University earmarked nearly EGP 74, 000, 000 to National Cancer Institute (NCI). ,, He also pointed out that ،،opening outpatient clinics and laboratories at Cancer Hospital at Sheikh Zayed 500500 will be within a year from now. ,,

Cairo University President added that ،،the first stage of Endemic Diseases Hospital at Al-Haram which works experimentally now will be opened before the end of this year. It contains three high-level viruses analyses laboratories. ,,

Cairo University President said that ،،the funding necessary for air conditioning the dome of the university was provided according to what is agreed upon with the Syndicate of Engineers and National Organization for Urban Harmony. ,, He pointed out that ،،Fellowship Fund for employees is boosted by Cairo University with EGP 40, 000, 000 to increase End-of-Service Gratuity in 2016 to EGP 100, 000 just like academic staff members. ,,

Cairo University President negated what was circulated on social media regarding separating male students from female students at the auditoriums of the university, saying that ،،this is merely a lie. ,,

Dean of Faculty of Medicine Fathy Khodeir said that ،،the number of patients treated at the university hospitals during 2015 reached EGP 2,100,052 citizens, 762 open-heart surgeries, 1200 neurosurgeries and 18 liver transplantations were performed. ,, He added that ،،academic staff members are daily present at Kasr Al-Ainy Hospitals. ,,