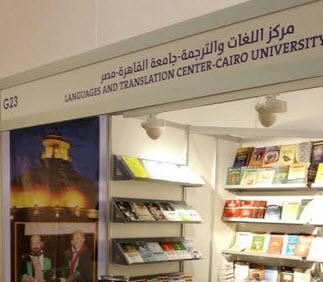 Cairo University completed all the preparations of its participation in Sharjah International Book Fair in its thirty-fifth tournament. The book fair is sponsored by H. H. Sheikh Sultan bin Muhammad Al-Qasimi, a member of the Supreme Council of the United Arab Emirates and current ruler of the Sharjah emirate. The book fair is to be held from November 2 to 12, 2016.

Cairo University participates at Sharjah Book Fair with a special section equipped with the most modern standards of exhibiting the volumes of Cairo University in different fields. Cairo University Center for Foreign Languages and Specialized Translation represents the University in Sharjah International Book Fair which is one of the most important global book fairs. The center contributes to the fair with a group of volumes, writings and books translated from different languages into Arabic language. Furthermore, the center participates with scientific journals, dictionaries and periodicals issued by some of Cairo University faculties, including Faculties of Arts, Dar El-Ulum, Mass Communication, Archaeology, Science, Law, Commerce and Kindergarten.

Cairo University mission is headed by The Director of Cairo University Center for Foreign Languages and Specialized Translation Amany Badawy who said ،،The participation of Cairo University in the Book Fair, this year, represented in the center came after the success it achieved in its participation throughout the past tournaments in the fair. ,, She pointed out ،،the titles that Cairo University participated with are more than 15, 000 titles, including global books translated by Foreign Languages and Translation Center. Most prominent books which were exhibited at the fair are Optimal Thinking, Speeches that Changed the World, The Golden Generation: New Light on Post-war British Theatre, Visual Culture, Tourism Geography. In addition, many scientific journals and studies issued by the faculties and centers of Cairo University are exhibited at the fair, include An Analytical Study of Islamic Dimensions in Scientific Theses which is published by Cairo University in cooperation with (UNESCO)The United Nations Educational, Scientific and Cultural Organization and (FUIW) Federation of the Universities of the Islamic World.