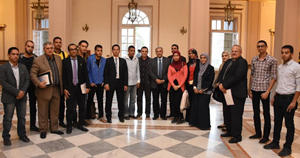 Cairo University announced the names of ،،Iqraa,, competition winners. The competition is organized for Cairo University students throughout the second term.  It is aimed at activating the enlightening role that the university plays among students. Students are encouraged to read, think in, and analyze what they read whether by presenting their points of view regarding the books or reading the books and presenting a summary on them. The university allocated EGP 100, 000 award to winners.

Prof. Dr. Gaber Nassar announced, during the meeting, holding a ceremony at 5 p.m., Wednesday, December 7, 2016, at Ahmed Lotfy Hall, Cairo University, for honoring the winning students and distributing among them awards allocated by the university. Prof. Dr. Gaber Nassar said that ،،Iqraa,, competition will be converted into a cultural institution at Cairo University for handling societal problems by adopting an issue in society and presenting a research and vision regarding them.,,

Cairo University Vice-President for Education and Student Affairs Mohamed Osman El-Khosht said that ،،Iqraa competition revolved around 3 books that represent more than one stage in the enlightening history of thought in Egypt and Arab region. Those books are interested in the issue of renaissance, reformation, and openness to human heritage. The books are The Future of Culture in Egypt, by Dr. Taha Hussein, Islam and the Foundations of Governance, by Ali Abdel-Raziq and Our Decline: Its Causes and Remedies, by Shakib Arslan. The Scientific Committee and expert arbitrators, including the university professors, finished their selection of 18 winning students with 6 winners per book.,,