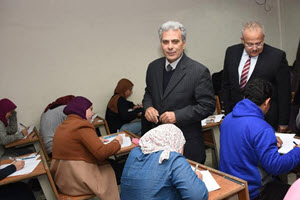 Cairo University President inspected first term exams progress at some faculties. He made an inspecting tour on Wednesday, January 11, 2017, for the exams of both faculties of Mass Communication and Commerce that are held at Exams Halls Compound at Cairo University campus.

First term exams at Cairo University witnessed quietness and no acts that may hinder their progress took place. The exams are regularly progressing in all faculties after the faculties provided all the controls of exams.

Cairo University faculties earlier finished all the arrangements of first term exams in the academic year 2016/2017 and determined the dates of student exams according to the study nature of faculties subjects. Exams started on December 25, 2016, and they are scheduled to end at all faculties on January 26, 2017. Mid-year vacation starts on January 28, 2017, and continues for two weeks.

For viewing images, kindly click on the following link