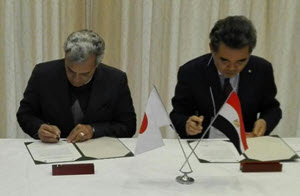 A cooperation agreement is expandingly activated in Japan during the current visit of Cairo University delegation, headed by Prof. Dr. Gaber Nassar, to Japan after an invitation from Hiroshima University. The cooperation agreement between the two universities will include, within three months, launching 4 research projects in fields of oncology, biotechnology, nanotechnology, and electrical power. These joint researches are equally financed by the self-resources of the two universities of value that equals USD 25, 000. The scientific cooperation agreement between Cairo University and Hiroshima University is signed in the light of strategic cooperation in fields of education and scientific research between the governments of the Arab Republic of Egypt and Japan. The agreement comes as a realization of the education initiative launched by both the Egyptian President Abdel-Fattah Sisi and the Japanese Prime Minister Shinzo Api.