Gaber Nassar: ،Sinai is in the Hearts of Egyptians. We all One Against Terrorism, 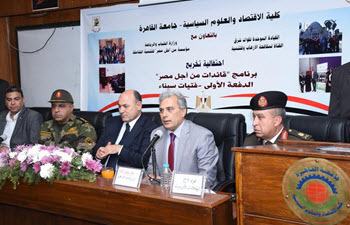 ،،Caring about North and South of Sinai is a crucial issue. Sinai is in the heart of every Egyptian. Egypt is all in solidarity with the inhabitants of Sinai against black terrorism.,, , said Cairo University President Gaber Nassar. He pointed out that ،،Sinai suffered from a long neglection. Egypt including the people and the army are with development in Sinai against terrorism.,,

This came during the graduation ceremony of the first class of the program of Female Leaders for Egyptian Girls in Sinai at Faculty of Economics and Political Science, at Cairo University. The program is developed in cooperation with Unified Command of the Area East of the Canal, Ministry of Youth and Sport, Nasser Military Academy, and Egyptians For a Better Egypt Institution.

The ceremony was witnessed by Lieutenant-General Ossama Askar, Cairo University Vice-Presidents, General Mohamed Saber as a representative of General Mohamed Abdullah, Staff Officer Bahgat Farid and some leaderships of the Armed Forces, professors, and students.

Nassar addresses his thanks to Lieutenant-General Ossama Askar, the Leader of the Unified Leadership of the Area East of the Canal. Cairo University President Gaber Nassar presented the Cairo University shield to the People Council Member of South of Sinai Hajja Galila because she played a prominent role in helping the Egyptian Army communicate with Sinai residents

Gaber Nassar: ،Sinai is in the Hearts of Egyptians. We all One Against Terrorism, - Cairo University