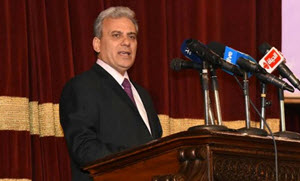 Cairo University President Gaber Nassar said, in the opening speech, that ،،combating corruption is the duty of each person in society.,, He pointed out that ،،Egypt suffered in the previous period from looting money through corruption networks.,, He added that ،،nothing is worse than corruption which should be confronted and anti-corruption culture should be cared about.,,

Cairo University President announced encouragement awards of EGP 30, 000 value for three competitions held on the fringe of the week. The competition is related to designing a colored poster that expresses corruption and protection against it, preparing a short film that includes a media message on how to activate the mechanisms of anti-corruption and the best faculty that presents activities during the week.

The Head of National Coordinating Committee for Combating Corruption (NCCCC) and Member of Administrative Control Authority Major General Khaled Saeed said during his lecture in the opening of the week that ،،The Egyptian state, lead by President Sisi, works seriously on combating corruption.,, Major General Khaled Saeed pointed out that ،،President Sisi visited Administrative Control Authority (ACA) - and he is the first Egyptian President who did that – to get assured about combating corruption.,, Saeed added that ،،the problem of corruption is existent in almost all over the world, however, all the countries decided to confront it.,,

Major General Khaled Saeed said that ،،Egypt has strategies for the confrontation of corruption and protection against it before taking place.,, He pointed out that ،،the only way to eliminate corruption is keeping human element away as much as possible through mechanizing all the services needed by Egyptian citizen as happened with national IDs, birth certificates and death certificate.,,