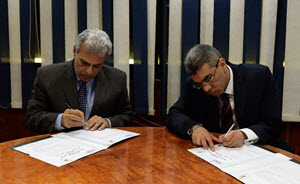 Akhbar Elyom Institution signed a cooperation protocol on March 14, 2017, with Cairo University to organize a joint conference, entitled ،،The Future of Education in Egypt: Towards Creative Solutions,, , by the end of April at Al Masah Hotel to develop Education system. The protocol is signed by the journalist Yasser Rezk, The Chair of Board of Directors of Akhbar Elyom and Cairo University President Gaber Nassar. The protocol signature is attended by the Editor-in-Chief of Akhbar Elyom Alaa Abdel-Hady and the official of higher education file in the news Mustafa Abdu.

Yasser Rezk said that ،،the conference comes in the framework of the invitation launched by the Egyptian President Abdel-Fattah Sisi from Sharm El Sheikh urging the development of education system through societal dialog. It also comes as a continuity of the societal role played by Akhbar Elyom Institution by adopting societal issues and seeking solutions as happened before in the economic conference of Akhbar Elyom for which many sessions were held at Sharm El Sheikh.

Rezk added that ،،the conference is aimed at getting enlightened by senior experts, specialists, student representatives, student parents, academic staff members, researchers and those who are concerned about the current situation.,, The conference is also aimed at reviewing successful international experiments to reach a clear vision for educational system development through applicable creative solutions that are available to decision makers. Rezk pointed out that ،،the conference is not aimed at highlighting problems and obstructs that we may all know since education is the concern of every Egyptian family.,,

Rezk said that ،،the preliminary sessions of the conference sponsored by Akhbar Elyom will tackle pre-university education, technical education and higher education to create a relative transfer in the education systems common between short-term stage and long-term stage.,, The conference is aimed at developing solutions for all obstructs that prevent a real benefit and an economic revenue from scientific research outputs, linking between industry and scientific research and providing a protection for youth researchers and innovators.

Rezk said during the protocol signature that ،،the conference originates from the adopting of Akhbar Elyom Institution for societal issues and seeking a tangible development in education file which is top priority for political leadership and of impact on all categories of society.,, Rezk pointed out that ،،the conference is based on a critical approach of thinking and is away from problems personalization that all are weary of.,, He added that ،،the conference delves deep into solutions through preparation sessions that encompass decision makers, specialists and those who are suffering from the current situation.,,

Cairo University President Gaber Nassar said that ،،Egypt does not suffer from insufficiency of resources, but deficiency of managing resources.,, He added that ،،education reformation and the solution of its crisis can be gradually achieved through affordable, or free, simple, non-traditional solutions.,, Nassar said that ،،the reformation experiment that Cairo University goes through is focusing on development without prejudice to the free charge of education or burdening the state with extra charges.,, He added that ،،many effective proposals for solving chronic problems of education and scientific research are to be reviewed.,,