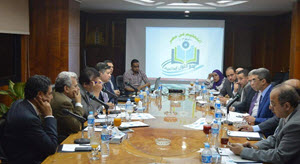 Cairo University allocates EGP 500, 000 for the best creative solutions presented to ،Education in Egypt … Towards Creative Solutions, conference which is to be held on April 30 in partnership between Cairo University and Akhbar Elyom to solve some problems of education.

The conference addresses some problems in the essential education system including the future of general secondary stage and enrollment at universities, private lessons, density at schools, school books and the development of technical education and linking it to industry. The conference also addresses some problems of higher education including economic management of higher education institution, how to benefit from scientific research in Egypt and employing it in satisfying the needs of the Egyptian state, exams system development, curriculum development and linking graduates to local and international labor market.

The previous was determined in the second preliminary session of the conference. The second preliminary session is attended by the Minister of Higher Education and Scientific Research Khaled Abdel-Ghaffar, Cairo University President Gaber Nassar, and The Assistant Chief Minister of Scientific Research Khaled Qassem. The session was run by the Chair of Board of Directors of Akhbar Elyom Yasser Rezk. The Chief-in-Editor Alaa Abdel-Hady and the Officer of Higher Education File in News Mustafa Abduh participated in the session.

The final document of the conference and its themes and the date of how to receive suggested creative solutions are scheduled to be announced by the beginning of the coming week. The prerequisites of applying to the competition will also be announced and made suitable for all different categories of society. The names of the committee that will be formed of senior experts will be announced to evaluate the sent solutions.

The Minister of Higher Education Khaled Abdel-Ghaffar said that ،،the conference is an opportunity for benefitting from ideas suggested for society to solve education issues and change its perception of some issues. It is considered a step towards accessing solutions suggested by society and those who are concerned with education issues.,, The Minister pointed out that ،، the two issues of general secondary stage and enrollment at universities and implementation mechanisms of scientific research have a great priority.,,

Cairo University President Gaber Nassar said that ،،the scientific committee of evaluation is being formed to accurately examine all the presented solutions, then filter them and invite their owners to present their ideas in front of the committee.,, Prof. Nassar added that ،،the conference is being prepared thoughtfully to present applicable solutions and present them to decision makers.,,

The Chair of Boards of Director of Akhbar Elyom Yasser Rezk said, concerning the creative solutions future to be delivered in the conference, that ،،a constant technical secretary will be formed to follow-up carrying out what will be agreed on with decision makers.,, Rezk invites all those who have creative ideas whatever their field to present them to the conference.