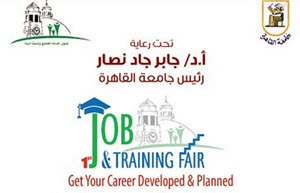 Cairo University organizes the first forum for employment and training on April 23 – 24, 2017

The forum is to be inaugurated on the coming Sunday at Cairo University Central Library. It is witnessed by former Secretary-General of the League of Arab States Amr Mousa, Minister of Higher Education and Scientific Research, Minister of Youth, Minister of Business Sector, Minister of Social Solidarity, Minister of Planning and Administrative Reform, Minister of Manpower and Immigration, Giza Governor, and many heads of the companies participating in the forum.

Cairo University Vice-President for Community Service and Environmental Development Saeed Daw pointed out that ،،the first forum for employment and training organized by Cairo University for its students and graduates is aimed at establishing effective relations between the university graduates and business sector. It is also aimed at providing future graduates of Cairo University with job opportunities.,,

Prof. Dr. Saeed Daw added that ،،areas inside Cairo University Central Library at campus are allocated for the companies and institutions contributing to the forum. Meetings are held with students to be graduated from different faculties.,,

The second activity, entitled ،،Innovative Scientific Projects Forum,, , is also held and is related to academic study including innovative projects, products and ideas among students.

Press Conference is scheduled to be held after the forum inauguration. The return of Cairo University Graduates League, headed by Amr Mousa, will be announced during the conference which is attended by the league board of directors and media men.