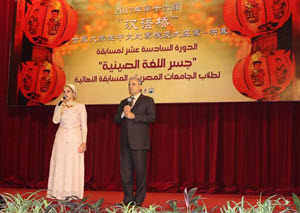 Cairo University occupies a distinctive position in the finale of the sixteenth tournament of ،،Chinese Language Bridge,, Contest for Egyptian Universities students. The contest is organized by Chinese Language Department, Faculty of Arts, and Confucius Institute, Cairo University, in cooperation with the Educational Bureau at the Chinese Embassy in Cairo. Two students; Nada Tarek and Basma Abdel-Halim win the contest to represent Egypt in the international contest that will be held at China in a new tournament.

The activities of the contest finale are held at Grand Celebration Hall. They are attended by Cairo University President Gaber Nassar and the Chinese Ambassador in Cairo Song Aiguo. Professors of Chinese language at Egyptian Universities, students and some foreign diplomats attend the activities.

Cairo University President Gaber Nassar welcomes, in his speech, the importance of communication between the Egyptian and Chinese civilizations through Chinese language study. He expresses his appreciation of China for its support for Chinese language learners at Egypt.

Chinese Ambassador in Cairo Song Aiguo enunciates his pleasure of the sixteenth tournament finale celebration of ،،Chinese Language Bridge,, Contest in which different stages he participate as well as universities students from 100 states around the world.

The Chinese Ambassador commends the level of Chinese learners at Egyptian Universities. He gives his thanks to Professors of Chinese language at Egypt for their efforts in teaching Chinese.

The Director of Confucius Institute at Cairo University Rehab Mahmoud said that ،،Chinese Language Bridge Contest is a good opportunity for the competition among Egyptian learners of Chinese at different universities.,, Students are given the chance to show their artistic and linguistic skills through presenting shows that are collective of singing, poetry and theatrical performance. There is general knowledge test also. Arbitration committee composed of Chinese specialists chooses winners. Twelve students from Egypt who represent seven Egyptian Universities participate in the competition.

The sixteenth tournament of ،،Chinese Language Bridge,, Contest is held for Egyptian Universities students under the slogan of ،،Dream Brightens Future.,, The dream of the Egyptian President Abdel-Fattah Al-Sisi and the Chinese President Xi Jinping is the achievement of the Belt and Road Initiative as a main step towards supporting cooperation between the two countries. The Chinese language learning is one of the pillars of this dream.