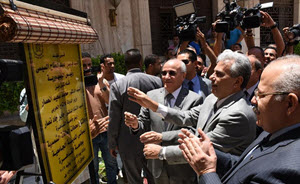 The Minister of Military Production Mohamed Al-Assar said, during the plant inauguration at the university hostel, that ،،Cairo University witnesses during the presidency of Prof. Dr. Gaber Nassar great steps towards development and updating. There is a productive cooperation between Cairo University and the Ministry of Military Production in many projects.,, The minister pointed out that ،،Military production has distinctive potentials in solar power production.,, He added ،،There are 24 projects of electrical power plant production through solar power all over Egypt governorates.,,

The Minister of Military Production said that ،،The ministry gives priority for military products.,, He added ،،Working on other projects results in surplus capacity in production which contributes to these projects for the interest of the Egyptian state.,,