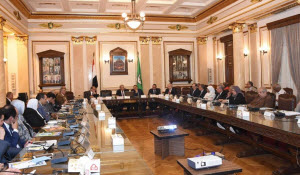 Cairo University Council, headed by Cairo University President Gaber Nassar, reviews exams work and results announcement at the university faculties. The council urges announcing results consecutively after the end of exams provided that results are all announced before mid-July, 2017.

The council approves the financial and administrative bylaw of Thabit Thabit Hospital for Internal and Endemic Diseases, affiliated to Cairo University. The bylaw includes performing the duty of the hospital in carrying out the policy of Kasr Al Aini Faculty of Medicine in education, training and scientific research. It also includes the responsibility of the hospital to create a generation trained on medical service, hospital management, and providing potentials necessary for medical research in contagious and endemic diseases.

The university council congratulates academic staff members for winning state awards (scientific research academy) for 2016. They amount to 12 professors in different scientific fields. The council also congratulates Faculty of Dar Al-Ulum, Cairo University, for being accredited by the national authority for quality assurance. The number of faculties that got quality and accreditation are 16 faculties so far. The council acclaims the achievement made by Faculty of Dar Al-Ulum although it encompasses large numbers of students.

The council is informed of the donation presented by the National Egyptian Bank of EGP 3, 000, 000 as an initiative for paying the study fees of unable students. The council approves paying study fees of some unable students of special programs. The university council enunciates the importance of the university role in helping students and estimating their social statuses.

Cairo University President Gaber Nassar said that ،،the development occurred to the university throughout the previous four years on the practical, educational, research, administrative levels is a collaborative effort that turns back to the council, professors and employees of the university.,, Nassar urges continuing development, preserving the achievements made and completing current files.