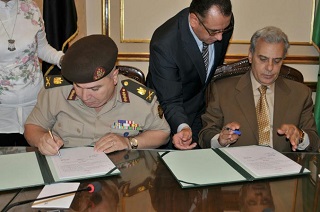 Cairo University and Military Veterinary services Administration sign scientific and research cooperation protocol in using animals in education and scientific research and information and knowledge exchange on global standards of the ethics of dealing with experiment animals.

The protocol is aimed at preparing a joint program in animal care and use in education and scientific research and organizing scientific and educating conferences and workshops in dealing with animals according to global standards. It also targets training and habilitating all researchers who work in this field, establishing database and designing academic and training syllabuses in the ethics of animal care and use in educational research field. The protocol is also aimed at information and knowledge exchange for reaching recent scientific measurements in this trend. The protocol also targets strengthening cooperation between Cairo University and Armed Forces to establish integrated engineering facility according to global standards for animal care and production, conducting varied experiments on animals and safe getting rid of dead animals.