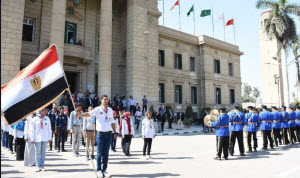 Elkhosht said in his speech that ،،Egyptian youth can achieve the nation hope of progress and development by participating in sustainable and societal development.,, He pointed out that ،،Egypt will grow and progress by its youth.,, Elkhosht acclaims the role of Egyptian soldiers in glorified October War as they enjoy high spirit that enabled them to achieve victory. Elkhosht enunciates his delight with the great participation of students in October victory commemorating ceremony organized by student initiative.

Major General Nagy Shohoud said during his lecture about October victory that ،،Communication between enthusiastic and innovative youth and experienced elders is important.,, He pointed out that ،،Egyptians should avoid repeating the challenges that faced Egyptian National Security after 1967 defeat.,,

General Shohoud warns youth from the tools of fourth generation wars most important of which are mobile phones which can be exploited negatively. He added that ،،Egypt is a target state, therefore all categories of Egyptians should stand shoulder-to-shoulder with each other to dismantle calls of discrimination and preserve Egyptian state.,,

Cairo University ceremony witnessed a documentary film on glorified October War and a seminar lectured by Chief of the Army Staff Nagy Shohoud on October championships.