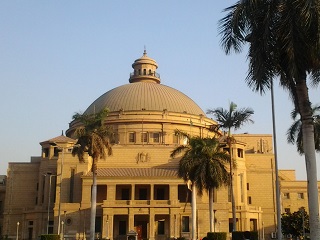 Cairo University supports and encourages its students to innovate and conduct scientific research in all scientific and service fields. Cairo University and Postgraduate Studies and Research Sector are pleased to announce a competition for students by applying to innovative proposals in the following fields:

Proposals are presented on two stages:

a-      Present brief description for student initiative proposals according to attached model through General Scientific Research Department (GSRD) via e-mail Stud_inov@cu.edu.eg starting from October 16 to November 15, 2017 (deadline). Initiative proposals will be evaluated and examined for determining which is eligible to enter the second stage of the competition and evaluation results will be announced to all students on the website of (GSRD) WWW.GSRD.cu.edu.eg.

b-      Present detailed proposals as report, that does not exceed 20 pages to start with brief proposal page that passed the first stage, to (GSRD) via email Stud_inov@cu.edu.eg from December 15, 2017 to February 15, 2018 (no proposal will be accepted after this date).

-          Ten winners will be announced (five for each field) and authorities that could benefit from those innovations and research will be identified for students to communicate with and discuss implementation possibility.

-          Ceremony to be attended by Cairo University President will be organized to honor winners and grant them: