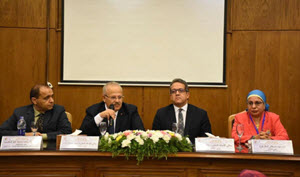 Cairo University President Mohamed Osman Elkhosht opens the activities of the fifth international conference, entitled ،،Monuments and Heritage in a Changing World,,  , and organized by Faculty of Archaeology, at Conference Hall - Cairo University, on Sunday, October 29, 2017. The conference is attended by Minister of Antiquities Khaled El Enany and elite of Professors of archaeology and students from Egypt and Arab states.

Elkhosht said in the conference that ،،Human evolution is associated with movement from the tangible physical aspect to the intellectual one.,, He pointed out that ،،Humans used monuments and arts to express themselves.,,

Cairo University President added that ،،Art used to play a role in expressing the divine truth according to human realization. Egyptian civilization used art and realized the existence of soul, reckoning, and resurrection. It achieved evolution to transfer from primitiveness to enlightenment. Egyptian civilization still has undiscovered secrets. Faculty of Archaeology has a big role in cooperation with Ministry of Antiquities to maintain ancient Egyptian monuments and discover their secrets.,,

Elkhosht illustrates the role of Faculty of Archaeology in working on the idea of Canadian International College (CIC) by cooperating with developed foreign universities to develop archaeological research, studies and programs to promote it to the global level.

El Enany added that ،،The condition of Egyptian monuments is not satisfactory.,, He states that ،،The ministry budget is small as it amounts to EGP 25, 000, 000 which is a sum that cannot afford fees and salaries.,, The Minister of Antiquities gives orders to Faculty of Archaeology to establish a program of fossils, museum studies, and archaeological sites management.

The conference earlier initiated its work by one-minute silence to mourn the souls of police martyrs who are victims of Oasis terrorist attack.

The conference discusses for three days research papers on serving decision maker and implementing this on monuments protection and maintenance.