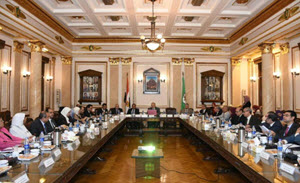 Cairo University Council, headed by Prof. Dr. Mohamed Osman Elkhosht, decides forming University Construction Committee that includes some professors of Faculty of Engineering, Faculty of Urban Planning, Faculty of Archaeology, and Faculty of Law. The committee is aimed at reviewing university construction project delivery regarding factors of security and safety of buildings to avoid the occurrence of any sort of deficiency in construction or other aspects.

Cairo University President Mohamed Osman Elkhosht announces that ،،Many measures are taken after a worker fell because of Cairo University Press ceiling collapse which establishment started two years ago. Those measures include referring the incident for investigation, and suspending work at the building and all constructions carried out by the same engineering process of the press ceiling. The measures also involve suspending the use of built or delivered constructions until the committee is assured of their construction and engineering safety, and preparing a report of the press ceiling collapse reasons by the committee. The measures are also inclusive of identifying whether the engineering errors were made deliberately, or negligently, or because of corruption. The committee has the right to access all papers and documents for these reasons as a preparation for presenting them to Cairo University President.

Elkhosht added that ،،The committee is responsible for preparing a detailed report of the buildings established with the same engineering process and their safety.,,

The committee is scheduled to finish its work regarding the press ceiling collapse within two working days, and present its detailed report on Sunday, November 5, 2017.