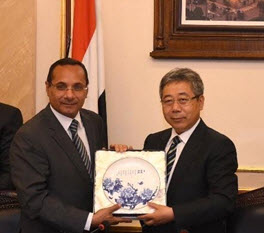 The Chinese minister witnesses some artistic shows of learners during his tour at Confucius Institute. He openly conversed with students on Chinese language study and cultural relations between Egypt and China.

Chen Baosheng enunciates his pleasure of the student high level regarding their knowledge of Chinese civilization and culture and study of Chinese language which he inferred from the artistic shows they presented. He acclaims the high quality of the Chinese language and culture teaching potentials reflected on Cairo University and Confucius Institute plan for enhancing openness between Egypt and China in the upcoming years.