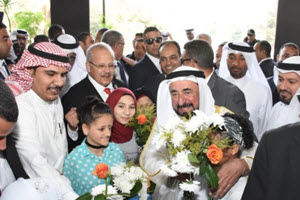 The sovereign ruler of the Emirate of Sharjah Dr. Sultan Bin Muhammad Al Qasimi said that ،،Egyptians should be committed to their hope in spite of many problems and daily sufferings. They should surpass these difficulties.,, He added ،،We are with Egyptians with all determination and strength to keep up with blessed path. We should not focus on the fog and fallers around us, however, we should concentrate on the light that guides us to the right path illuminated by Egyptian President Abdel Fattah El-Sisi.,,

Al Qasimi added ،،Egypt will be on the world summit.,, He spoke out his presentation of a report to National Cancer Institute Dean Mohamed Latif. The report is prepared by Sharjah laboratory on the new discovery of lung cancer. He presented the report to the institute dean to get it examined by National Cancer Institute and read its medical details. He pointed out ،،There is an Egyptian researcher at Sharjah cancer laboratory called Mohamed Ismail. He is one of the medical team members of Sharjah cancer research laboratory at the Francis Crick Institute in London.,, Sheikh Al Qasimi wishes patients and injured speedy recovery.

Cairo University President said that ،،Sheikh Al Qasimi is related to links and many deep bridges to Egypt. He remembers the streets and people of Egypt. He joined war 1956 and exerted efforts to volunteer for war 1967.,, Cairo University President pointed out that ،،His Highness makes donation to cancer institute. It is a pure donation that stems from his love to Egypt and its people.,,

Elkhosht illustrated that ،،National Cancer Institute bears a huge burden in the coming stage due to the increase of cancer patients and turnout for the institute to receive treatment.,, He said ،،We hope that concentration is directed to the establishment of Hospital 500500 in the coming stage at priorities level and for avoiding side development battles.,, He pointed out that ،،National Cancer Institute plays a great role in treating cancer patients and conducting cancer research. It is graduating medical cadres working in this field.,,

Cairo University President added ،،There are many important messages to be addressed. The first message is concerned with Cairo University which moves forward towards becoming a third-generation university that focuses on education and scientific research as two wings of comprehensive development and re-establishment of the state foundations.,, He pointed out that ،،Third generation university is concerned with all faculties, institutes, and centers of Cairo University. Priority may be for centers and institutes in the coming stage because they lead research and development processes at large.,, He said ،،National Cancer Institute is prior to all institutes for its great role that is concerned with Egyptian citizens health.,,

Cairo University President pointed out that ،،Postgraduate studies should be expanded. International training and publication should be financed and expanded.,, He indicates the importance of the role played by National Cancer Institute since establishment in 1969 in converting the disease from impossible disease to dangerous disease. He said ،،Cairo University looks forward to finishing the establishment of Hospital 500500 to accommodate the increase of cancer patients. It is the time to focus on important projects in scientific and research fields.,,

He proceeded ،،The second message is related to National Cancer Institute and Hospital 500500. The two institutes can only be uplifted by donations. Making donations is a pure charitable act that is free from any other targets and does not seek anything except duty. It is personal commitment that motivates donor to make donation.,,

Cairo University President illustrated that ،،H.H. Sheikh Al Qasimi managed to develop his country throughout the last 40 years to the best. He is one of the pillars that United Arab Emirates is established on in 1971.,, He pointed out that ،،Dr. Sheikh Al Qasimi has a philosophy in establishing Emirates. His philosophy is based on culture, science, education, and scientific research. He managed within this framework to convert Sharjah into a capital of Arab culture despite the fact that it is not a political capital because it is generally the case that cultural capital is a political one. Sharjah was converted to a cultural capital due to the cultural role played by Al Qasimi.,,

The Dean of National Cancer Institute Cairo University Mohamed Latif said that ،،The global situation of cancer in the last 30 years indicates the duplications of infected cases. Cancer is expected to exceed hematologic diseases and be the first and main reason of death.,, He pointed out that ،،Medical progress leads to increase in life expectancy rates and population census which makes us feel that cancer infections continue to rise.,, He added that ،،Cancer deaths at Eastern Mediterranean Region will rise from 9.4% to 12.3% in 2030 according to the World Health Organization (WHO) estimates.,,

National Cancer Institute Dean illustrated that ،،The cancer problem in Egypt is special as the average age of infection is 45 years old.,, The patients frequenting the institute in the period from January 2017 to present are 214, 898 patients who get their treatment for free. National Cancer Institute professors cooperate with professors of other universities to develop a national plan for combating cancer from 2016 to 2020 and the plan activation has already started in Egypt.